No, no. It's not that kind of post (please... my mother reads this) (which is about it besides Ashley)(thanks both for the support of my blog and subtle disappointment in my lack of actually blogging). 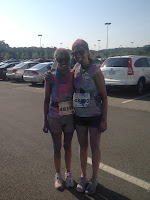 CAN YOU SPOT THE AWKWARD 4TH GRADERS IN THE PICTURE ABOVE??
(hint: cover the picture from the bib numbers up)


Ashley and I ran a 5k on Sunday sponsored by ColorMeRad. I've never experienced such a 5k in my entire life (mostly because this is a pretty unique 5k and partly because this is only my third ever 5k... my first two being the exact same standard 5k).

As we pounded/dragged/wishedweneversignedupfora5kinjuly along the zig-zaging course, Ashley and I passed through four cloudy stations of color, each one covering us in a different neon color via handfulls of neon powder.

It was a rainbow-brite lover's paradise, with neon colored cornstarch being thrown at runners like the sand you threw at your little sister on the beach, less the crying and tattle-tailing. I had the feeling that somewhere in Boston, a RoseArt Super Sand Art manufacturing plant just exploded, its contents landing only in the South Shore Plaza. On me specifically.

Coming off of our 5k, Ashley and I decided that we should start our own 5k (look for H2gO! in cities near you!) and also sign up for our first half-marathon. One of these things is false. The other is in process. 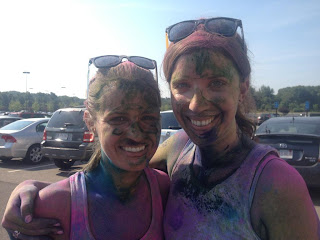 Posted by Katie Loeffler at 4:52 PM