My oh my. It would seem as though I've reverted back to my non-posting ways. I could have posted on my day off yesterday (thank you, Chris C.) however I was too busy watching Keeping Up with the Kardashians and Gossip Girl (stop judging me right now), eating M&M Minis and failing at arts & crafts (aka impossibly easy impossible Pinterest projects).

Let me catch you up on some of the things that have happened since my last post:

1. Winston and Walter were almost kaput within seven days of getting them. True story.

One day they decided to get very, very sick. Both of them. For no reason (I'm sure there was a reason, but $1000+ worth of ER visits and tests over three days with no diagnosis makes me think the kittens were just faking it).

Both were doing well and were back to wrestling, breaking my stuff, tearing my new sofa, meowing and pouncing on my leg, however Winston is sick again. Poor little guy. All Walter wants to do is pounce him and bite his ears and I can't even let him do it. Poor two little guys.

2. The presidential debates began. Walter could have cared less. 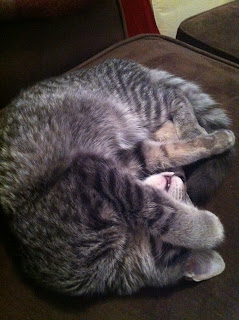 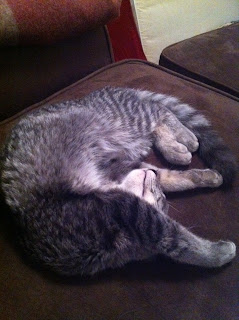 I'm with ya, Walt. Good thing I had wine, popcorn and homemade chocolate chip cookies to keep me occupied.

3. I took a yoga class. The teacher kept calling us 'yogis' and told me I looked like a runner (I don't. My feet have recently turned gross though, so maybe that's how she knew I occasionally run?). I was the only person in the class that couldn't do a headstand and lacked any kind of poise and balance so that was a little awkward. It's fine. Runners don't need to do headstands.

4. Edythe came for a visit. It was great to see her, and great to gossip. Nothing like some good family gossip over wine and cheese. Sorry, family, if you're reading this. Nothing bad was said, I promise.

5. I ran my first half marathon on Sunday with Ashley and we did pretty well. I got a "runners high" around mile 9 and was convinced that I could run a marathon if I wanted to. That thought quickly went away at mile 13.2, aka when I sat down. I have another half marathon in three weeks, so we'll see how that goes. I'm (oddly) looking forward to it. I'm thinking that feeling will wear off, though, when it's 6:30am on a Saturday and I'm running up and down the freezing coast of Falmouth.

6. According to the internet, I have Extensor Tendonitis so that's fun.

7. Julie was here for the weekend (so was Sean) which was really exciting. I got to see Michelle, too (and Brian) so that was even better. What I love most about the three of us getting together is that we tell the same stories from college every time we get together, and every time I still laugh to the point of hyperventilation. Also what I love is the shenanigans we get ourselves into. Love the shenanigans. (This is the worst, most vague bullet point I've ever made. I really apologize. I'm laughing so hard while writing this. There's just no way of putting years of best friend-ship into a post and have it make sense and/or be funny to anyone but you.)

Update. There was something else that I did since my last post. I watched the Bills vs. Patriots game at the same bar I watched the first game in  (dressed more appropriately this time I'm happy to report). I was THE only loud Bills fan in the bar which was very clear during the first half of the game when the Bills were beating the Patriots. I was hootin' and hollerin' (about what I have no idea) and someone turned to Alan and asked, "is she with you?" to which Alan replied "no." I was feeling pretty good about myself and thought for a little while that I was going to be celebrating another Bills victory. That was not the case, however, and I was reminded of that throughout the second half.

Whatever. Let me enjoy my hot chocolate(s) at the bar in peace, people. It's just a game.