What's happened since, and a play-by-play.

1. I realized I should have been a doctor or a paramedic.

My cute boyfriend really did a number on his head the other day. I heard a loud crack then a thud as Alan hit the kitchen floor, hands on head. At first I thought he was being a trickster because he cries wolf an awful lot. However, when I started seeing blood all over the floor (it was a small puddle, so I'm obviously being dramatic) I went instantly into first-aid mode (which is a complete 180 from any previous medical emergency where my assistance was probably needed and I just ran around and cried instead). It's apparent after I treated Alan's head wound (and cleaned up all kinds of blood without vomiting) that I should have gone to medical school. Guess I really missed my calling. 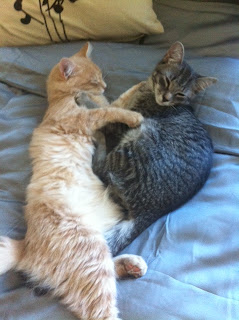 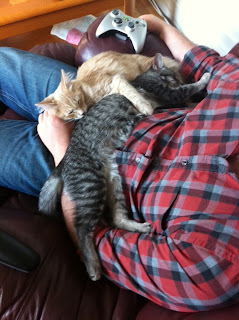 4. I ran 12 miles along the BAA half-marathon course and while doing so confirmed my support of Death with Dignity. Here's a small play by play:

Mile 2: I'm running on a busy road because there are no sidewalks. I contemplate if getting hit by a car (only a small ding, c'mon) would be enough to earn me a purple heart and get me dishonorably discharged from running forever.

Mile 3: I regret not running since two Thursdays ago. Oh wait, I did run 1.67 miles with my sister a week before this run so that's good.

Mile 5: Oh, you're golfing and can't get from one hole to the other without a golf cart? Shut up and give me a ride.

Dear family at Mile 6 who is BBQing on this beautiful day in the park,
Cease and desist unless you're offering me something fresh off the grill.

Mile 7: I stop three times to ask for directions. The third time I stop in a police station (big mistake). Never. I repeat. Never, approach a group of police officers behind a police station (fully sweaty and breathing obscenely loud) unless you want to be yelled at to back up and possibly have weapons drawn on you. Also, don't take their advice on directions because they'll make up train tracks that don't exist and tell you to cross them and then make a right.

Mile 8: People are moving out of my way further and further ahead of me which indicates that I'm huffing and puffing louder and louder. Nice.

Dear guy carrying a pizza box at mile 9,
Don't smile at me unless you're going to also offer me a slice.

Dear anyone riding a bike after mile 2 but specifically at mile 10,
Don't pass me unless you're going to offer me a ride on your handle bars.

Mile 11: Just checking on my form 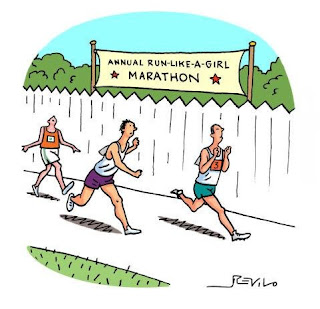 Mile 12: Almost done! Almost done! I'd skip but I'm already race-walking and that seems to be using all of my available energy at the moment.

What followed mile 12 was a walk up three flights of stairs. I think the people smoking outside who could see me through the staircase windows were genuinely concerned about my state.

Posted by Katie Loeffler at 7:48 AM